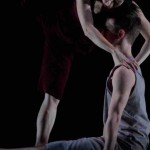 To celebrate the 20th anniversary of the renewed diplomatic relationship between Vietnam and America, and to commemorate the 40th anniversary of the unification of North and South Vietnam, Together Higher Dance Company of Vietnam has invited Robin Becker Dance to join them in a performance tour in Vietnam. The tour runs September 22-30, with performances in Hanoi, Ha Long Bay, and Ho Chi Minh City (formerly Saigon).

This ground-breaking project brings together the artistic expression of two choreographers, Le Vu Long of Vietnam and Robin Becker of the United States, in works examining individual and societal responses to the Vietnam War and its aftermath. Through their collaboration, the dance companies hope to facilitate healing on both sides and build a deeper relationship between the people of Vietnam and America.

Together Higher will perform “Group of Individuals” from their Vietnam in the 70’s project, concerning the social unrest during the late years of the protracted war between North and South Vietnam. The piece expresses the confusion of separation and joy of reunion as well as the postwar torment of people loath to part with their home countries.

Robin Becker Dance will perform “Into Sunlight”, a dance inspired by They Marched Into Sunlight by Pulitzer­Prize winning journalist and author, David Maraniss. “Into Sunlight” addresses the impact of war and violence and the power of dance to provide reconciliation for individuals who experience the trauma of battle and for a society engaged in its own battle of reconciliation.